'The Spanish Tragedy' review or 'Shall we use red ink?' 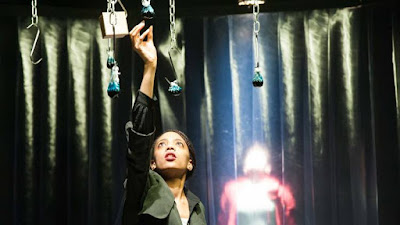 There are some vicious cuts in Dan Hutton’s contemporary take on ‘The Spanish Tragedy’ – but it is the text, and not the characters, which has been slashed to pieces. This is a condensed and acutely self-aware version of Thomas Kyd’s Elizabethan tragedy, which has lopped out characters, done away with great swathes of text and recast men as women. It’s a clever but clinical show – one that gets the brain whirring but fails to quicken the pulse.
The basic plot remains the same: Don Andrea (Lee Drage) has been killed in battle and, with Revenge by his side, watches a blood bath unfold in response to his death. Revenge has been cast as the key player in Hutton’s pensive production and is played to slippery perfection by Leo Wan. Dressed in black and sat among us, Revenge controls the show, which unfolds in a pseudo S&M chamber, a plastic curtain encircling the stage. He takes on the role of a faithful servant and conniving king, plants crucial props and, with every murder, coolly pierces small bags of gooey blood that dangle above the stage.
Revenge’s cruel games work brilliantly – it’s just the rest of the characters that feel iffy. The actors struggle with Kyd’s devilishly ornate dialogue and great speeches are lost to sloppy delivery (India Semper-Hughes is the one, blissfully clear exception). Dramaturg Ellie Horne has made some bold decisions but the text is choppy and unclear and the show becomes exceedingly tough to follow.
Yet amidst the confusion there is a real gumption and flair in here. There’s a stunning scene late on, when the play-within-the-play is suddenly delivered in stark, modern idiom. It’s such a sharp moment, which rips the text wide open and leaves Revenge literally breathing down our necks.