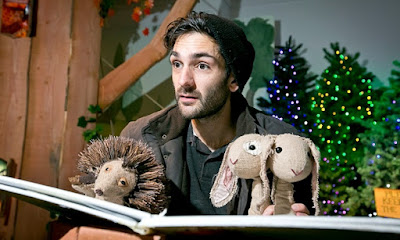 Before Percy the Park Keeper’s Winter Park begins, my goddaughter, Blue, has already been up and down a slide eight times. She has also crawled through a cave, created her own puppet show and run wild in the playground outside. The Discover Centre has two play spaces – the Story Trail inside and the Story Garden outside – and they’re worth the price of admission alone. It’s like clambering inside a kid’s head just when their imagination is firing. After all this multisensory, multicoloured mayhem, the show itself is a tad disappointing.
The set, which has been designed by the Discover team, is undoubtedly gorgeous and impressively faithful to Nick Butterworth’s original illustrations. Green glass glistens, a wood hut is nestled in the corner and a great oak tree climbs up the centre: it’s as if someone has lovingly nudged the pictures on to the stage. You can almost hear the young children sigh with happiness as they’re ushered into this cosy and familiar space.
The show is based on the picture book After the Storm, in which Percy has to find new homes for the animals after his park is damaged in a gale. Oddly, Percy himself never appears. Instead, Percy’s assistant, Mike (Daniel Naddafy), guides us through the story. Naddafy is a calming onstage presence, but it’s a bit of a nothing role, especially compared with the book’s kind and twinkly Percy.
The children are sat on a “lawn” in front of the stage and the adults are perched behind. When the children are engaged, they shuffle forward. When they’re a little lost, they edge back towards their parents. Perhaps they’re all too pumped after the playground but they take a long time to settle. At one point, a curious child ventures too close to the stage and an usher intervenes. This might be labelled an “interactive” show, but the interaction is strictly monitored.
As is so often the case, it’s the puppets that reel in the kids. A patchwork fox, fluffy squirrel, dozy badger, duck, rabbits, moles and mice all scamper across the stage. The children edge closer and quickly pick their favourites. One child becomes so attached to the mole that she beams and waves at it for a good few minutes.
Once the repairs have been made, the new animals’ homes are revealed: a grand perch for the owl, a snazzy swing for the rabbits and a snug little space, complete with nuts, for the squirrel. For a few precious minutes, the stage feels like home. It’s a charming and cheering final sequence, which taps into the nostalgic comfort that Butterworth’s books provide.