'Macbeth' review or 'Are you sure we're meeting with Macbeth?' 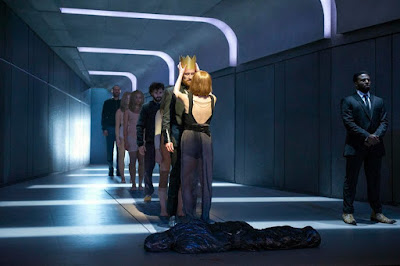 There are so many sexy embellishments in this production of ‘Macbeth’: frenetic dancing, a silvery sliding corridor set, dangling microphones, zombie dances and writhing witches. But despite all this hot-breathed foreplay there’s no orgasm here: no real passion, fire, release or bloody rage. Instead, Carrie Cracknell and choreographer Lucy Guerin have created a highly attractive but profoundly muddled version of ‘Macbeth’, which tickles our senses but never, well, shoves the knife right in.

This is a dance-led production and yet – weirdly – it feels like you could chop the dance right out of this production and it’d make precious little difference. The three witches wear skin-hugging nude costumes and spend a lot of time doing juddery dances across the stage. They’re pretty good at juddering but there’s no real story, progression or feeling in their movement and it begins to feel a bit redundant. I kept trying to lose myself in the dancing – dig deep and find some meaning there – but I eventually gave up.

Dance and death carry out a merry duet throughout the show but the movement always feels like an afterthought – an embellishment – rather than something that’s properly lodged into the heart of this production. After Macbeth kills Duncan, two beautiful lads lurch and sweep about the stage; it’s quite nice to look at but it doesn’t really add much. When Macduff’s ‘pretty chickens’ are slaughtered, two of the witches – wearing ghostly sheets with eye holes – are strangled by the dancing chaps. I thought we might be lurching into farce territory – that could’ve been really interesting – but giggling isn’t really encouraged in this rather humourless production.

What with all that jittery dancing – and a set that constantly draws attention to itself (‘Look at me slide, look at me drop, look at me slide again!) – the actors struggle to make an impact. Anna Maxwell Martin has a torrid time as Lady Macbeth and turns in her least convincing performance for years. Martin is one hell of an actress but she seems totally lost. She rattles through the dialogue, speeding up for no apparent reason and bellowing out ominous words in a quest for meaning: ‘Ambition! Mad!’ It’s horrible to watch. John Heffernan doesn’t fare much better although his Macbeth is certainly the most convincing aspect of this production. There’s a crystal clarity to Heffernan's soliloquies but they feel oddly removed from the rest of the show; it’s as if a brilliant poet has stumbled on stage to give an impromptu reading. He’s a pleasure to watch but I’ve no idea what he’s doing there.


Resolutions are made and bloody deeds carried out in a strangely blurry fashion. If you didn’t know the story, you’d have bugger all idea what was going on. All the glittering soliloquies lose their sparkle. Lady Macbeth spends half of her ‘out damned spot’ speech peering down a drain. Whilst Macbeth has his existential moment with a dagger, blinding lights flash above him. They might as well have created a lighting state that spelt out: This Is Meaningful! It’s as if the team has highlighted all the important moments without really digging beneath them. This is an absurdly talented company but they’re all pulling against each other, tugging in different directions and slowly pulling ‘Macbeth’ to pieces.