'A Chorus of Disapproval' review or 'Meh.' 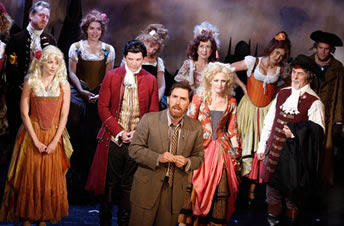 Ayckbourn is flavour of the month – nay year – right now but one can have too much of a good thing. When Ayckbourn is on form, such as with the beautifully constructed 'Norman Conquests', he can't be bettered. But when he's just alright (and this hugely prolific writer has penned over 70 plays) it can all feel a bit tiresome and, dare I say it, safe.

'A Chorus of Disapproval', written in 1984, verges on mediocre and director Trevor Nunn has done little to spice it up. The play revolves around an amateur production of 'The Beggar's Opera' and it is the rehearsal extracts, with a second rate cast doggedly going through their paces, that prove the most entertaining. Nunn has always been brilliant at corralling a raggedy chorus and his copious experience in musicals shines through. But the play proper, which is neatly interwoven with the musical extracts, feels a little limp.

Nigel Harman plays Mr Nice Guy – appropriately named Guy – who has recently joined the drama society, following his wife's death. Although he is initially shy, Guy soon succeeds both on stage and with the ladies. With flat hair, a fluffy jumper and a winning smile, Harman plays the straight guy to perfection. It's not his fault it's a fairly flat role that only just avoids turning insipid.

Ashley Jensen – playing a downtrodden wife and spurned lover – also feels a little restricted. Her performance never really takes off. The one showstopping role is that of cheerfully grumpy, self-obsessed director Dafydd. This role could've been written for Rob Brydon and he makes the most of some excellent gags; 'I call her my Swiss army wife – no man should be without one.'