'The Second Mrs Tanqueray' review or 'Stomp a little harder!' 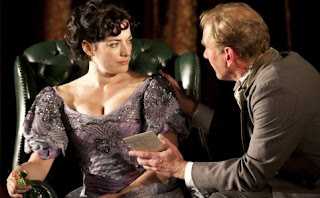 Neglected Victorian playwright Arthur Wing Pinero is about to have his 'moment', with revivals of two of his trademark farces coming up at the National and the Donmar. Over in Kingston, director Stephen Unwin has chosen instead to rescue a brittle tragedy. I rather wish he'd stuck to Pinero's strengths.

The plot, which concerns the potential salvation of a 'fallen woman', recalls both Shaw's 'Pygmalion' and Ibsen's 'Hedda Gabler'. But although Pinero has a wit as sharp as Shaw's, this play lacks the urgency and depth of his contemporary's work.

But the production grows steadily less convincing as Paula finds herself increasingly unable to live her future in the shadow of her past. Laura Michelle Kelly, who won an Olivier for her Mary Poppins, is miscast as the flighty and feisty Mrs Tanqueray. She is simply too nice, and even her frustrated foot-stomps feel false. Kelly 'performs' best in the scene changes, when her rich singing suggests a brave resolve that is lacking elsewhere