'Proud' review or 'Boxing without the punches' 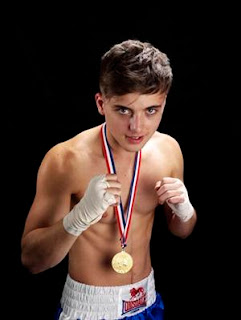 As a small lad practises his boxing moves, strobe lights pulse around him and images of London and Olympic glory are projected above his head. It sets the scene for a high amp drama but is one of the few exciting scenes in this limping production.

Supposedly an 'Olympic story for an Olympic city' this is actually a predictable tale about a young gay lad struggling to come out. The boxing barely comes into it. Lewis (Parry Glasspool) is celebrating his 18th birthday with his family and boyfriend. But drama (if only) is brewing. Lewis' coach, Mac (Charlie Carter), is visiting and he has no idea that Lewis is gay. In a thumpingly exaggerated twist, butch Mac also happens to be a raging homophobe.

Much hilarity supposedly ensues, as Lewis and his pals try to keep his secret. The fact that Lewis and boyfriend Tom (Matthew Hebden) have next to no chemistry together, renders all the secrecy fairly pointless. Virginia Byron, as the screeching and screamingly inappropriate mum, adds some desperately needed spark but even her punchlines ('He's out. He's proud. Get used to it!) sound pat.