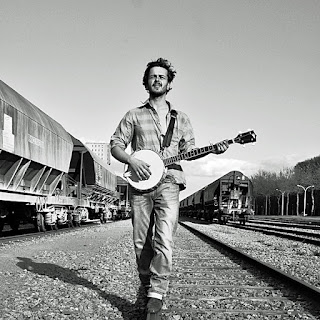 A young lad, his innocent girlfriend and estranged father are trapped inside a freight train. What was meant to be an anarchic trip to California has turned into an indefinite prison sentence. It sounds like the ideal ingredients for an intensely claustrophobic play but Dylan Dougherty's 'Bound' derails early on.

Neglectful father, Banjo, is certainly an eccentric character but Pascal Maetens swallows more lines than liquor. Nick Modrzewski seems uncomfortable in his role as rebellious son Quinn, uncertain whether he is downright callous or simply confused. Celine Verbeeck has a quiet intensity but she struggles to make an impact alongside such erratic performances.

The script is not only garbled but uneven, jolting awkwardly between stiff monologues and loose dialogue. The production's momentum swings wildly, dependent on the actors' wavering confidence rather than the play's emotional arc.

This is a stuttering journey from Belgium company Noosfeer, rescued only by some heartfelt singing from musician Dries Bongaerts. Give him a solo show but maybe leave the rest behind. 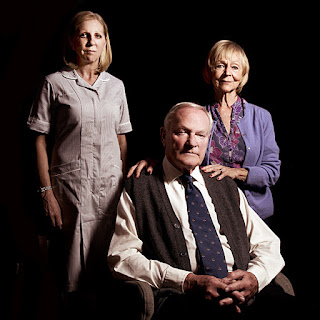 Maurice's health might be fading but his love for the Queen, sparked by a shared dance on Coronation night, remains undimmed. Will Maurice manage to hold on for one last encounter with Her Madge?

The production is grounded by a typically powerful performance from Glover. Maurice's whole life glimmers in Glover's eyes, which seem to search for past emotions now lost. Sheila Reid, as Maurice's long suffering wife, flutters about like a starling looking for somewhere to roost.

The fantastical meeting between Maurice and the Queen (McAuliffe) is a wonderful indulgence but it's also distracting. There's some dark stuff nestling behind this play about a man more devoted to the monarchy than his missus but it's never fully exposed. A softly charming piece but a touch too whimsical to really set the heart alight.

'Turn of the Screw', Henry James. A new version by Benjamin Henson
Zoo Southside, Tuesday 7August
Written for The List 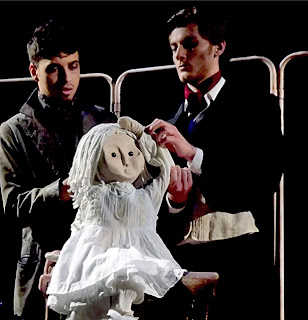 Henry James' slow-burning thriller, 'Turn of the Screw', demands an exceptionally sophisticated approach. It's a sign of HookHitch Theatre's determined ambition that they're willing to tackle this piece at the Festival, where fast and furious often comes out on top.

The two haunted children are played by hand-carved puppets, with beady eyes and tight mouths. They seem fragile yet sinister too. These puppets are controlled by the very ghosts that haunt James' spooky country house. It's a smart twist that expresses the absolute power these spectres now possess.

This is an ensemble directed piece and the company manipulates the space well. With a few thoughtful touches, HookHitch Theatre transform a limited venue into a fluid and surprising space.

It's all very smart but just a tad rushed. Benjamin Henson's adaptation is assured but concertinaed. The acting also feels constrained. With only an hour available to build towards such extreme emotions, the performances veer towards melodrama. With just a little more time and patience, this Screw could dig very deep indeed.
****************************** 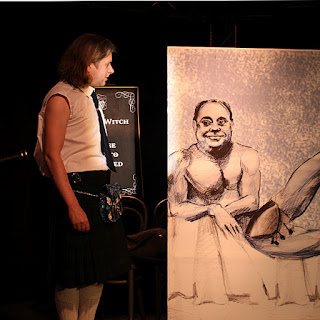 'Lingua Frank' is supposedly a comic play but is really a sketch show, stretched to snapping point. The scant plot revolves around bumbling English Language tutor Frank (Harry Gooch), who has lost his girlfriend and is on the brink of losing his job. A script as thin as this requires some serious comic bolstering and the jokes just aren't strong enough.

The performers deliver their punchlines with gusto and their obvious comic talent is underused. Gooch resembles a ginger-haired Stephen Mangan and has a similar delivery, understated but sharp. Charlie Hindley pours his considerable energy into playing Frank's arch rival, Chest Armstrong, but even he flags as the script peters out.

The comedy revolves around silly characters rather than genuinely funny situations. Frank's colleague, Bollard (Garry Dobson) is a kilt wearing and blazingly proud Scot. The gag is that he is also gay. Jokes such as this feel grindingly obvious, even lazy. The company valiantly hammer away at their punchlines but, more often than not, it's a swing and a miss.

A man dressed in a 'Where's Wally' hat and a huge, dirty nappy serves dinner to two teddy bears. Surprisingly, this is the most accessible scene in Anthony Johnston's willfully obscure one-man show.

'Tenderpits' is ostensibly autobiographical but it's hard to make out Johnston's story amidst all the screaming, wanking and singing. This is a peculiarly choppy and angry show. Johnston speaks with animals, dresses up as the Little Mermaid and talks about sex. A lot.

The bare facts just about make it through. We discover Johnston was born in Canada, moved to New York and found life tough. He is also obsessed with computer games and wizardry. Sometimes these themes seem very important and, at other times, completely irrelevant.

Johnston has also suffered real tragedy, losing his sister and grandmother in 2010. Perhaps his grief is still too raw. At one point Johnston screams out; 'Cancer kills!' It feels like he is using theatre as therapy and makes for an extremely uncomfortable and alienating production.

'I Shall be Remembered', Elizabeth Woodman
Venue 150 @ EICC, Wednesday 8 August
Written for The List 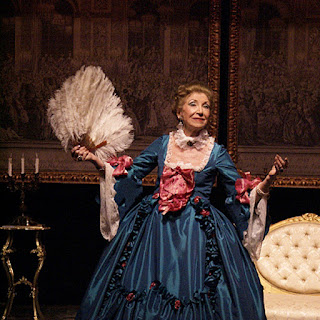 The stage at the EICC has been dipped in gold. Gliterring trinkets lie on gold-rimmed furniture and gold-framed paintings line the walls. This is the 18th century court of King Louis XV and the domain of his savvy mistress, Madame de Pompadour.

Despite such sparkling props, 'I Shall be Remembered' is a rather dull and one-dimensional one-woman show. There's little palpable direction from Cathryn Parker, bar a few welcome blasts of courtly music. Other than this, it's down to Dame Elaine Montgomerie to keep us engaged. She is certainly a determined performer and there's a cheeky sparkle in Montgomerie's eyes, as she breathlessly recalls Pompadour's extraordinary rise to the top.

But Elizabeth Woodman's script isn't sharp enough. It reads like a meandering diary entry and is too long and too sentimental. Pompadour was an extraordinary woman but she was also incredibly ruthless, abandoning her family in favour of the King. Yet these compromising characteristics are completely ignored, resulting in a skewed and fluffy play. 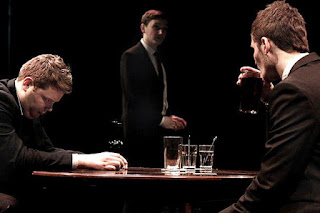 You don't have to dig deep to see just how talented DugOut Theatre company is. 'Inheritance Blues' revolves around blues cover band, Hot Air Ballues, who not only create rich music together but also share some cracking chemistry. I've no doubt this company will one day be the toast of the Fringe but this devised comedy doesn't quite hit the mark.

There's much to celebrate here. The band members weave their jokes and music together with great skill, as if their words were part of the score. The characters are nicely amped up and zen percussionist, Champagne (Harry Williams), has some cracking one-liners; 'The ground is all the air we need.'

These segments are so slick they feel improvised and one senses some rigorous direction from George Chilcott. It's a tough act to follow and the straight play that runs alongside feels limp in comparison. As the story crescendoes and the music dims, the show loses its sparkle. A little more tweaking required but there are blue skies ahead for this fine company. 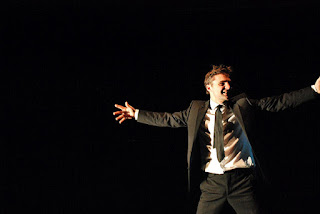 A really great interactive show creates a new environment so convincing, the audience has no choice but to get involved. 'Exectuive Stress/Corporate Retreat', which unfolds in a black box space packed with sharp-suited actors, doesn't quite manage this. Devised by Australian company Applespiel, this show is stuck somewhere between a play and a genuinely interactive experience. It makes for an embarrassing rather than immersive affair.

The actors aren't quite committed or consistent enough. Sometimes their performances are gleefully quirky, as they play corporate bods driven bonkers by stress. At other times, the actors come across as bland but realistic office workers. It's tough for the audience to surrender to the show, when surrounded by such uncertainty.

We're frequently encouraged to endure a number of 'character building exercises' but, with little input from the actors, it feels horribly over-exposed. We alternate between playing the role of spectator and performer and the constant jolts are unsettling. A promising idea but much more rigour is required to set this concept free. 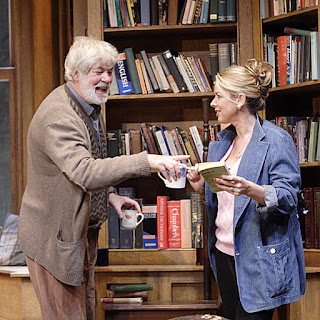 You've probably read 'Educating Rita' at school. If not, you've almost certainly seen the classic film, starring Michael Caine and Julie Walters. Willy Russell's play is practically in our blood stream. A new version, then, needs to be something special. Whilst Tamara Harvey's production is solid it's a touch too safe for the Fringe.

Claire Sweeney plays Liverpudlian Rita, who blasts into Dr Frank's Open University office demanding to 'learn everything'. Sweeney might not have the chaotic energy of past interpretations but she's an honest and endearing performer. There's a surprising softness to her Rita, who seems more concerned with helping her drunken tutor than bettering her own life.

But it all feels a tad predictable. Although there's a gentle chemistry between Rita and Dr Frank (Matthew Kelly), there are no real fireworks. Kelly makes for a wonderful drunk but there's not enough grit beneath his gravelly outbursts. A polished production but it never reaches the emotional depths necessary to make this over-exposed play feel fresh once more.