'Prince Charming' review or 'Does the castle even exist?' 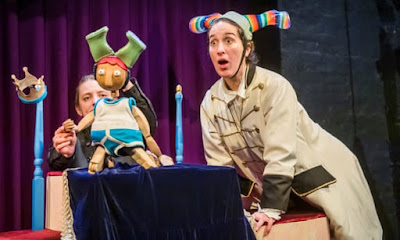 Prince Charming is having an identity crisis. Sleeping Beauty is still asleep (he hasn’t mustered up the energy to save her) and the prince is so anxious about his life, and the sorry state of the world, that he can’t get out of bed. It is enough to send a good prince round the bend – and it’s certainly enough to keep my eight-year-old goddaughter Blue happily entertained. Granted, Blue looks downright baffled at some points during this gloriously offbeat puppet show but she’s certainly never bored. Neither am I.
This is an audaciously sophisticated piece of children’s theatre, which is as much for the adults as it is for six- to 11-year-olds. Playwright Jenny Worton, who has written for the Gate and Almeida theatres, isn’t afraid of chucking in a few surprises. Sometimes they work, sometimes they really don’t – but it is great to a see a show that isn’t afraid to challenge and confuse its young audience.
Puppet-maker Emma Brierley depicts the prince as a spindly wooden creature, his eyes permanently popping out of his head. He is a delicate but stroppy little chap, and Blue instantly warms to him. The prince is joined by his courtier and godmother, Gomo, played with extravagant quirkiness by Giulia Innocenti. As Gomo coaxes the prince out of bed, Blue turns to me and asks: “Why is there a puppet and an actor on stage?” It’s a great question.
Ross MacKay’s production moves along at a lovely zip, and his set is efficient yet imaginative (the castle turret lampshades are a nice touch). But it is hard to maintain real heat and drama when the principal interaction is between a puppet (controlled by Nix Wood) and an actor. Just occasionally, the show feels a bit lopsided – not quite one fantasy world nor another, and that is a tricky space for the children to inhabit.
Worton and Tom Gray have also written songs, which are perky and witty, even if the melodies are a touch monotonous. But it is the swerving script that keeps the kids enthralled. Gomo takes the prince to the beach in an attempt to relieve him of his anxiety. There they face down lightning (with the help of some very silly anti-lightning hats), battle with quicksand and learn how to talk with other kids. After facing his fears, the prince realises – with a massive jolt – that he is a puppet. He whips around and confronts his puppeteer. The children in the audience watch with mouths agape.
Things get stranger still, as the prince experiences a full-on existential meltdown. He tries to flee, only to reach the limit of the stage. The lights go up, and the children are pulled into the show, while also being made aware they’re watching a piece of fiction. It’s a bit much. I’m not sure Blue understands what is going on, but as the prince runs through the stalls – free of his fears and ready to leave the stage – my goddaughter follows him every step of the way.