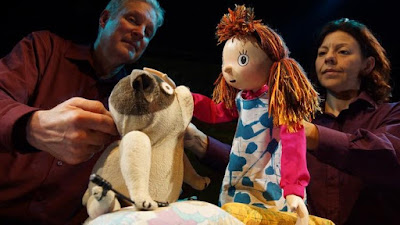 Two of the great loves of my life are about to meet: my two-year-old nephew Joseph and theatre. This is Joseph’s first trip to the theatre and I’m trying very hard to pretend it isn’t a big deal. I play it exquisitely cool when I meet him outside the Little Angel Theatre, and just about stop myself from crying out: “This is it! This is the beginning of the rest of your life!” We make it inside Dogs Don’t Do Ballet without a slip-up from this crazy aunt and the show begins. I spend most of the time looking at Joseph, rapt and just a little bit bonkers. About two minutes in, and Joseph begins to cry.
It takes a trip like this to remind oneself just what an assault on the senses theatre can be. Before the show even begins, the questions are spilling out of Joseph: “Where is the music coming from? When will it stop? Where do all these children come from? Where does the music come from? No, but where does it actually come from?” It’s such a lot to process, and a giant leap from the controlled areas he normally occupies into this new space, which must feel packed with potential surprises and unknowns. In lots of ways, I’m really quite jealous of Joseph; it’s very rare for theatre to feel so alive and mysterious to me anymore.
This is a returning Little Angel production – once again based on an original book (this one is by Anna Kemp) – and there’s lots about it that is brilliant. Keith Frederick’s floppy-bodied and wooden limbed puppets look like they have pirouetted straight out of Kemp’s book; they’re Sarah Ogilvie’s illustrations with extra life and movement in them. The story, about a dog who discovers he can and must do ballet, is a good one, too.


But there are a few missed landings in David Duffy’s production – particularly when it comes to the fearsome ballet teacher Miss Polly. This rather grand (and imposing) teacher is played by Ronnie Le Drew, dressed in drag and draped in bright red velvet. She opens the show and is, quite simply, way too much for Joseph to process. Overloaded and confused, Joseph’s brain shuts down and panic stations set in. “Go home!”, cries Joseph, as he points towards the door, anxious to find a space that he recognises and understands.
Joseph isn’t alone in this reaction and initially the show is punctuated with quite a few cries and sniffles. The uniquely brilliant thing about children’s shows is that you learn just as much about the children in the audience, as you do about the characters on stage (older audiences are much harder to read and much less willing to emote). While some children start to cry, one lad runs full pelt towards the stage. Another kid behind me chuckles constantly (seriously, what in god’s name is he laughing at?). And the child in front of me responds very strongly to Joseph’s tears.
After watching the beginning of the show from the back of the theatre – safe in his mum’s arms – Joseph sits back in the stalls. Spend enough time with something that you don’t understand, or that initially frightens you, and it will begin to feel normal, or at least known. Fear is not the same as dislike, and what is brilliant about children (again, not the same with adults) is that they are willing to work through the fear and find out what is on the other side.
As soon as the ballet teacher disappears and the puppets emerge, the children settle. There is something about the constancy and distance that puppets bring with them – they will not surprise with new emotions and they are not quite human – that allows children to relax. The puppets take over the show, calm settles, and Biff the Dog begins to dream that he is dancing. Two giant red ballet slippers dance alongside him, as ribbons shimmy through the air and Prokofiev shudders and blasts through the speakers.
Biff goes along to watch, and eventually perform in a fancy ballet production. The orchestra warms up and Andrea Sadler – a twinkly and open-arms kind of performer – introduces the different instruments, which have all been painted on lolly sticks. A shiny splendid backdrop is propped up to frame the stage (Tim Sykes’ set is romantic but practical) and a puppet ballerina, purple and sparkly and elegant, prepares to dazzle. Eventually, of course, the dog takes over and everything that was once scary – the music, the dance, the other children in the audience and their rattling emotions, and even that frightening ballet teacher – no longer feels scary anymore and, for a precious moment, this theatre is home.