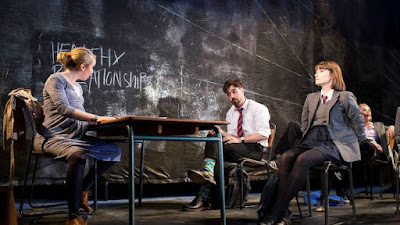 When I was at school, sex education consisted of a stuttered speech from the teacher and a few awkward giggles. It was a joke. These days, that naive approach just won’t do and the government recently announced plans to teach ‘consent’ and ‘healthy relationships’ to kids as young as 11. Evan Placey’s new play ‘Consensual’ – which kicks of the NYT’s annual West End season – explores the way we educate kids about sex: what constitutes a healthy sexual relationship and how do teachers talk honestly about these issues without the lines becoming blurred?

The play kicks off seven years down the line, when young Freddie confronts his ex-teacher Diane. Back when Freddie was 15 and Diane was 22, the two had sex. Freddie is convinced he was groomed but Diane insists otherwise. Who should we believe and who should we condemn?

Placey’s play subtly shows us both sides of this sad and sordid story, which plays out in front of a looming blackboard. Initially, suspicion falls on an increasingly defensive Diane – played with such emotional depth by Lauren Lyle. But when we flash back to the night in question, young Freddie (Oscar Porter-Brentford; a bundle of confused bravado) suddenly doesn’t seem so young anymore. You can practically hear the audience’s moral maxims shatter in the dark around you.

Director Pia Furtado’s production is lively, sparky and ballsy as heck. Admittedly, some of the scenes are a bit clunky and the ‘youth chat’ – innit that and internet this – occasionally feels forced. But this is a show that gets the brain pounding and blood pumping. In between scenes, the cast dance, rap and stomp to Jim Hustwit’s pulsing music. They throb with a kind of primal energy, which is inviting, intoxicating – and just a little bit threatening too.