'Fantastic Mr Fox Review' or 'Are you Flat or are you Fluffy?' 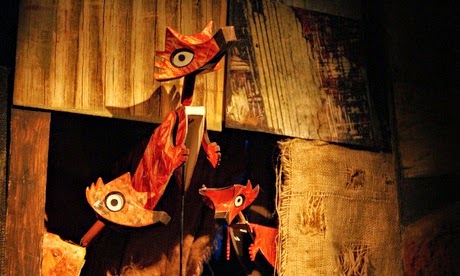 It’s bedlam at the Little Angel theatre. A huge children’s party is in full swing, the place is heaving with excitable kids – and I have been roundly stood up by my friend’s eight-year-old daughter. I am going to have to experience the trials and tribulations of Fantastic Mr Fox and those pesky farmers all by myself.
Steve Tiplady’s production is ever so earnest and the first half doesn’t set the imagination on fire. In Peter O’Rourke’s set, the countryside is reimagined as a series of green-washed cardboard cutouts and Fantastic Mr Fox’s den is represented by a hole under a tree. It is not the type of set you want to reach out and touch.
The puppets are initially underwhelming: the foxes are sleek, red cardboard cutouts. They’re nimble creations but they’re not the most lovable stage creatures I’ve ever seen. Nearly everything is made of cardboard and it all feels a little, well, flat. The evil farmers, Boggis, Bunce and Bean, are far more appealing and look like weird raggedy dolls with gothic cutout heads. When the lighting is right and the shadowing spooky enough, they’re really quite frightening.
The kids around me feel engaged but not enthralled. When I chat to my mini companions during the interval, they’re mostly just relieved that Sarah Wood’s adaptation is shorter than Roald Dahl’s original. Everyone seems mildly chuffed with the whole affair – but it certainly doesn’t feel like we’re winning over a young new generation of theatre-lovers.
The second half, thankfully, is a different story. The puppets double in size and the puppeteers, earlier hidden by the set, move out into the open. It’s an odd phenomenon, but puppet shows often feel more mysterious when one can see the strings attached. Samuel Dutton’s Fantastic Mr Fox grows twice as charismatic with Dutton’s face and features now out in the open, the foxy kids seem doubly dinky, and John Broughton’s skeletal farmer Bean becomes infinitely more menacing. Ben Glasstone’s songs feel sparkier, too, particularly the plucky number, Chicken House Number One.
The puppets, which earlier felt small and remote, venture into the audience and interact with the kids. A fluffy rat sits on one child’s knee and the now huge and rather glamorous puppet-foxes greet the spellbound kids with regal waves of their paws. Everyone seems rapt and one kid gets so involved, he tries to clamber right on to the stage. Perhaps it’s not so bad that I was stood up after all…