'The Kitchen Sink' review or 'Who's for sushi and a selection box?'

'The Kitchen Sink', Tom Wells
Bush Theatre, Wednesday 23rd November
Written for Culture Wars
Not all new plays have to shock. They don't even have to baffle. In fact, some excellent new playwrights appear hardly to be trying at all. Instead, these select, natural few depend solely on their charm, wit and observation skills. Tom Wells – thank you Bush Theatre – is one of these writers.
The understated grace of 'The Kitchen Sink' is perhaps partly down to its location. For once, we are not in London but in a small, dwindling town in deepest darkest Yorkshire. The pace of life and, consequently, the plot is much less urgent than 'normal'. Instead, Wells ambles, slowly and thoughtfully, through the year in a life of one close but troubled family. It is the tiny details that matter here. Not a lot happens but gradually and deftly, Wells builds up a beautifully textured picture of family life. It's a little like a Mike Leigh piece - only much, much warmer.
All the characters strike as exceptionally natural, instinctively drawn creations. Young son Billy (Ryan Sampson) is so gentle, he ends up hugging out a fight. He dreams of art school, where he can explore his love for Dolly Parton, in wild colours. This camp, Northern son could've turned into a 'type' but Billy continually surprises. His love for Dolly Parton, instead of being used as a vehicle for cheap gags, feels earnest and heart-felt: 'They will look down on Dolly. People do!'
Again, homey mum Kath (Lisa Palfrey), could've been a cliché; the hard-working mum struggling to keep her family together. But, although Kath is touchingly generous with her love, she's nutty too. She might make a lot of tea and cake in the kitchen but she also strips in front of the kitchen sink. She might take good care of her children but she isn't averse to a spliff. She might even make sushi for Christmas dinner.
No character is neglected and every relationship develops at its own, carefully controlled pace. Daughter, Sophie (Leah Brotherhead), endures a stuttering seduction from local plumber Pete (Andy Rush), whose idea of risk-taking is ordering Peri-Peri at Nandos. Though this is an innately warm play, Wells never becomes sentimental and poor Pete has to endure a stream of angry swipes, from frustrated Ju-Jitsu addict Sophie. Their courtship is sweet but there are spikes in there, too.
Director Tamara Harvey treats Wells' gentle script with the lightest of touches, making her presence felt in only a few, choice, moments. When son Billy finds out he has got into art school, sunflowers rise in each corner of the stage, bathed in a glowing light. It feels like a new beginning. Designer Ben Stokes' kitchen set also incorporates subtle but useful touches: the kitchen cupboards are open-faced, allowing us a closer glimpse at the intimate details of family life.
But there are few flashy effects here – bar a wonderful, watery explosion from the sink – and Harvey has wisely focused her energy on her actors. Seemingly casual encounters are intelligently emphasized, transforming potential throwaway scenes into memorable moments. When Sam finally gets his dad to open up to him, the pride gleaming in Sam's eyes reminds us this 'tiny' moment will live with this son forever. 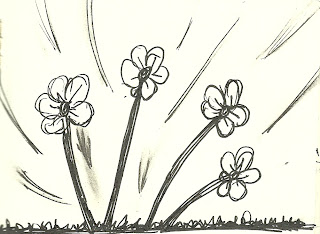